Here are a few photos from LSU campus as the Scripps Howard Academic Leadership Academy continues in the Manship School of Mass Communication.

BATON ROUGE– The Scripps Howard Academic Leadership Academy provided an excellent opportunity for lessons in all things purple and gold.

In between learning about ourselves and leadership styles,  there have been a few moments to interact with Mike, the LSU Tiger and take in the scenes around the Journalism Building, which houses the Manship School of Mass Communication.

The Tuscaloosa News’ April 6, 2012 photo illustration of Alabama Softball Coach Patrick Murphy in what looks like an LSU Uniform misleads and goes a bit too far in illustrating a “what if” scenario.

Maybe it was only me who did a double-take this morning when I saw what I thought was a photo of Alabama Softball Coach Patrick Murphy in a LSU ballcap in skybox on the front of The Tuscaloosa News.

For a moment, I thought I had missed an announcement that he was leaving Alabama again headed for Baton Rouge.

Fortunately (for Bama fans like me), Murphy is not repeating last June’s episode where he was announced at a news conference as Bengal tigers’ new softball coach, only to change his mind.

The image shown above may be one the National Press Photographers ethics police might look at as an example of questionable visual journalism.

As Executive Sports Editor Tommy Deas’  story today tells us, Murphy “never donned the purple and gold in a practice or at a game.”

But, the big photo ILLUSTRATION on the front of the Sports section of  today’s Tuscaloosa News would suggest otherwise.   A version of the photo is what appeared in the skybox on the main front of the newspaper.

It is interesting to note that the web editors of TuscaloosaNews.com decided NOT to use the photo illustration, but a file photo of Murphy in his Alabama uniform with a softball player.

Did Photo Illustration Go Too Far?

The designers at the Tuscaloosa News DID NOT cross any ethical line.  They clearly labeled the image a Photo illustration noting today that “the colors of Patrick Murphy’s shirt and cap were digitally altered from crimson to purple in this photo with LSU insignia added.”

But, STILL, why did the web editors NOT use the photo illustration online?

Is the Tuscaloosa News manufacturing an image that is misleading?

Will readers take time to read the cutline for the photo illustration produced by Marion Walding and Anthony Bratina?

Not the First Time Patrick Presented in Purple

Before we go too hard on the Tuscaloosa News editors, let’s not forget the publicity photo that the LSU folks distributed prior to the Murphy announcement. It showed Murphy and his associate softball coach Alyson Habetz, in the LSU purple before the actual news conference where Murphy was to be formally announced.

The image with the would-be labels of Murphy and Habetz is still available online.

The image, no doubt, was to designed to build enthusiasm about this new big hire for LSU.

It is not that uncommon for those in public relations or sports information departments to manipulate images for artistic or promotional effect.

But,  I think it’s a  little dangerous for journalists to wade into these murky waters with photo illustrations that look like real photos.

Had it been a cartoon (which I know Anthony Bratina does better than most in the country),  I could see that as an appropriate way to depict the “What If” scenario that is the subject of Dees’ story.

Perhaps using a file photo of Murphy from the LSU news conference last summer would have been more journalistically responsible? 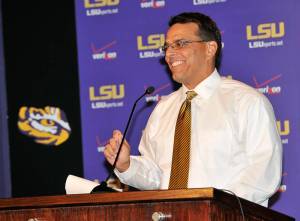 The Decatur Daily’s beat writer covering the Crimson Tide may not have realized how important this photo would be nearly a year later, especially as LSU softball team plays Alabama this weekend.

The trouble, of course, is the real photo is not as provocative as the photo illustration.

Perhaps Deas and his staff knew what they were doing when they did “press the envelope” (Pardon the awful cliche) and went with an illustration of reality as it ALMOST WAS.

Just as I did with the other photos in this post, anyone could  find Bratina and Walding’s illustration online and present it as a real photo.  Most readers online wouldn’t know the difference.

This ethical problem may be the reason the T-News Web staff did not use the illustration.

From an ethical standpoint, the illustration ONLY works with the cutline explanation and, even the clarification which Dees makes in his story about what Murphy actual wore.