He’s analyzed every congressional race in the nation since 1984, but until this week National Public Radio’s Ken Rudin had never step foot in the state of Alabama.

After a stop in Montgomery where he visited  Southern Poverty Law Center Founder Morris Dees on Monday, the self-proclaimed “political junkie” brought his decades of wisdom here to Tuscaloosa  to the University of Alabama campus for a lecture sponsored by the Honors College and UA’s Housing and Residential Communities.

Rudin recalled how the late Former Governor George Wallace was making headlines “when he was a kid,” but that in all of his years following electoral races he had journeyed to Wallace’s state.

With just about six weeks to go until Rudin’s latest project, Impact of Government, launches, the former ABC Newsman took his fellow journalists to task for not covering the stories that really matter, especially when it comes to events in government.

“The stuff that affects people is what journalism really should be about,” he said.

A New Project
Starting in June, NPR will officially roll out a multiyear initiative to put additional state level reporters to work in 50 states over the next three years. 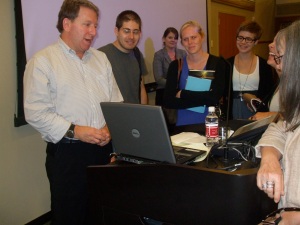 While this new Impact of Government initiative launches, Rudin hopes the new broadcast and digital reporters hired will not be like many he says are in the profession today.

“Journalists are lazier,” he said as he noted how many newspapers have suffered layoffs in recent years.  He noted that there are more cases of plagiarism than ever.

And as for those talking about politics…

“It’s just remarkable who they have on TV now as pundits.”  Rudin told the students.