The fact that Elon University’s School of Communications showcases its core principles and values on an iPad is just one indication of how this journalism and mass communication program has positioned itself for the future.

ELON, N.C.– If you’ve spent any time visiting parts of the Elon University School of Communications, one of the things you notice is the bright colors and the “cutting edge” look of the building.

But, the explicit list of what the dozens of faculty and staff who work here believe is especially striking.

Nowadays with brand new buildings like those of the Cronkite School at Arizona State or the Gaylord College of Journalism and Mass Communication at University of Oklahoma,  it’s not that uncommon to have a new facility.

Taking nothing away from ASU or OU,  but having visited both,  I see the facilities here Elon are reflective of a “way of life” in this School that clearly is remarkable.

My colleague, Rich Landesberg, was kind enough to give Dr. Sunny Smith of Jackson State University and I a personal tour of  McEwen Hall so we could see the facilities.

One of the common elements in the classrooms is a posting of “The Elon Eleven,” a catchy statement of principles.  But, it’s not just that statement– but the fact that it’s presented on an iPad that is impressive.     How cutting edge can you be?

Can you think of another School of Communications in the nation where they present their core values and competencies on an iPad?

Does it mean that Elon is in Apple’s back pocket?  Or, is it a recognition of the significance of the tablet PC as a technological tool for communications in the future?

“The tools of Technology” is one core competencies that Elon emphasizes. 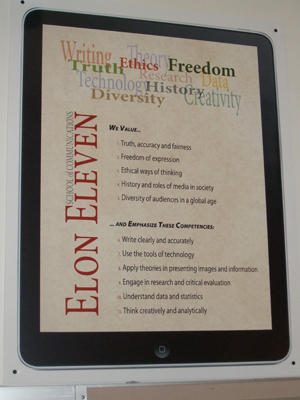 Many of the other ten areas: writing, truth, diversity, ethics, theory, history, freedom, creativity, data and research were evident in many of the things I heard this weekend at the Broadcast Education Association District II Conference held here in McEwen Hall.

From a rich discussion about Elon’s award-winning effort to achieve all types of diversity within its school to is offering technical training to its students on such updated software as Adobe’s Digital Creative Suite 5 to a Schoolwide iPad Initiative,  the folks here are clearly practicing what they preach.

We can sometimes put on a good show when there are visitors around (and in fact, the BEA Conference was not the only special event happening in the Comm Building this weekend), but it’s another when you can see this is an everyday thing.

From what I could see this weekend, I think this is an EVERYDAY thing here at Elon.

There are definitely some things for all of us in journalism/mass communication education to learn.